Action for Children is a national charity which helps and supports over 350,000 of the most vulnerable children, young people and their families through 650 projects in their local communities.

The Charity was founded in 1869 by Rev. Thomas Bowman Stephenson, a Methodist minister, as a result of his concern for vulnerable and destitute children and young people living rough on the streets of London, and the poverty and danger they faced. The Charity was formerly known as the National Children's Home, but in 2008 the name was changed to Action for Children to reflect more accurately the work it does.

Today, Action for Children is the leading UK provider of family and community centres, children's services in rural areas, services for disabled children and their families, and services for young people leaving care.

The work of Action for Children is supported actively within the Thames Valley Circuit with thousands of pounds raised each year by a range of events and activities. Typically, these have included street, store and racecourse collections, sponsored walks (as part of the nationwide Step Out for Children event), and concerts, as well as ongoing fundraising with Home Collection Boxes. As an example of special events, one of the highlights of 2015 was a specially-written "Nativity" play, with joint performances by members of St Mark's Crescent and High Street Maidenhead Methodist Churches with singing by the members of Thames Valley Voices. This alone raised £775.

Forthcoming events are included in the Circuit Diary.

This picture, taken following a Rotary Club concert raising money for Action for Children, shows some members of the circuit's AfC committee together with Sir Nicholas Winton MBE (who organised the rescue of children from Czechoslovakia on the eve of the Second World War — the Czech Kinder Transport) and local dignitaries. 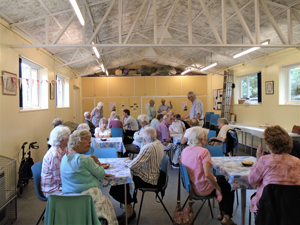 Action for Children celebrated its 150th anniversary in 2019. This was marked within the Thames Valley Circuit with a number of special events, such as the afternoon teas shown here at Cookham Rise and Old Windsor Methodist Churches.

The pictures on this page show some of those who have helped to raise thousands of pounds within the Circuit for Action for Children over the years, such as running in half marathons or children's races, sponsored swimming (these two girls each completed over 100 lengths!) or while singing for the pleasure of shoppers.

If you would like to know more about the work of Action for Children including its current campaigns, follow this link.